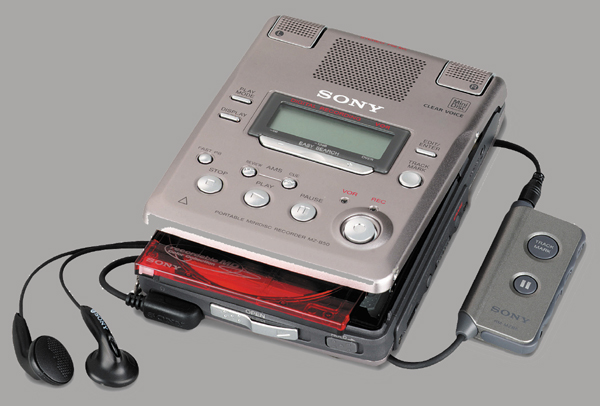 It was during the political campaign season of 1996 when we took Radio World's review sample of Sony's then new MZ-B3 Minidisc recorder to ABC Radio's newsroom in New York City. We wanted some opinion about the first MD machine designed for "business" use. Instead, we helped launch a radio revolution.

ABC News correspondent John Lyons was about to begin the network's "Rolling Across America" tour. He would spend the next six weeks sampling political opinion in 30 states. Lyons planned to record his interviews on DAT, edit on his laptop, and feed the sound files to ABC via modem.

The plan changed when this veteran reporter was shown the B3. Impressed with its excellent performance, portability and ease of use, Lyons asked for and got his own B3 for the upcoming tour. He became so comfortable with the recorder that he totally abandoned the DAT format and adopted the B3 for all of his on-location interviews. From then on, the use of Minidisc spread rapidly across the radio map.

Over the years the Sony B3 portable has become a workhorse for audio journalists. It's light to carry, offers good battery life on AA cells and is about as reliable as any electronic device can get. In fact, since 1996, I have logged hundreds of interviews on my pair of B3s and have yet to lose a recording due to a technical failure.

Understandably, Sony's release in 2001 of a successor model, the MZ-B50 ($449.95), was greeted with some excitement among those recordists who are heavy users of the Minidisc format. The new model is lighter, has longer battery life and features a built-in stereo microphone, rather than the mono mic in the B3. On paper, the MZ-B50 appears to be a winner.

That is, until one discovers the fatal flaw.

In designing the B50, Sony's engineers somehow missed one of the most important ways reporters use the venerable B3 -- for fast written transcription of audio material. When recording interviews, news conferences or speeches, key sections are labeled with a "track mark." At the time a good candidate for a usable sound bite appears, the reporter simply hits a button to ID that location. Later, when navigating through the recording, track marked sections can be found quickly.

For transcribing interviews, the B3 adds to the convenience by allowing the easy backward and forward shuttling of the recording while in the play mode. This way when you miss a word, just to press the rewind button and the recording gently moves back a few seconds. This audible mode usually works quickly, taking from one to two seconds to activate once the user presses and holds the appropriate RW or FF button on a B3.

Not so on the B50. Reverse movement takes much longer to activate -- consistently from six to eight seconds once the user depresses the rewind button. Forward movement, in our tests, was never less than eight seconds. Not only does one have to wait for what seems to be an eternity for the machine to respond, but the round RW/FF buttons on the B50 are so tiny that they dig into your fingers as you hold them down.

It's a surprising ergonomic faux pas for Sony to make such a design mistake in updating a successful product. The bottom line is that the B50 is so awkward and frustrating to use for transcription that we finally abandoned it and went back our trusty B3.

Though this problem has been noted on Internet message boards for months, Sony offers no fix, pointing users to a new feature of the B50 called Easy Search. This function allows the user to move forward or backward through a recording in one minute increments. Easy search is a nice feature, but no substitute for the unreasonably long time it takes the B50 to activate the FF/RW buttons in the play mode.

As online reviewer Daniel Robinson put it: "The main problem -- the one that is almost fatal from a professional standpoint -- is the FF/RR which makes using the MZ-B50 and searching for portions of recorded material like walking in molasses."

Other than this serious deficiency, we found that the B50 performed well as long as we used an outboard microphone. Motor noise was often apparent when recording with the built-in stereo mic, a common problem that plagues many recorders with this design.

When stereo recordings are made on the B50, a new feature called Voice Up has been added to enhance voice clarity during playback. The Voice Up mode emphasizes the left-right orientation of individual voices, making them easier to distinguish and hear. The function is most effective when using headphones to listen to stereo recordings made at meetings and conferences.

For some reason, Sony chose to limit Fast Playback, another useful feature from the B3. In the older model, the playback speed can be set to either 1.6 or 2.2 times as fast as normal playback. In the new B50, fast playback is fixed at 1.6 x.

Though Sony's product managers will not say so on the record, it appears the manufacturer may have recognized the problems with the B50. A new model, the MZ-B100, has been announced in Japan and is expected to be released in the United States in the spring of 2002.

Though we could find no one who has had hands-on experience with the B100, a product sheet for the new model highlights a "jog dial for easy speed control and editing." A playback control function varies speed from +10 percent to -20 percent, the product sheet said. It was not clear whether the shuttle problem has been solved with the upcoming model.

Hopefully, the new B100 will be more responsive than the B50 to the real world needs of journalists who use Minidisc in their daily work. In meantime, the B3 -- in this user's opinion -- remains the gold standard for portable MD recorders.

(Frank Beacham is a New York City-based writer and producer. His web site is at www.beacham.com. Email: [email protected])