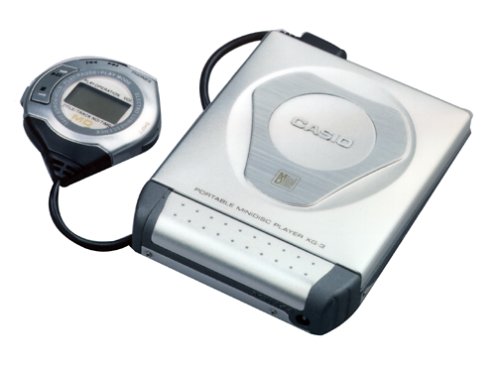 Finally, a real alternative to the high priced Sony's and Sharps for the US has arrived in the form of the Casio XG-3. Will this be the full featured $99.99 player we have been begging for?

Arriving in a simple blue and gray box, the XG-3 would appear to have humble intentions. The manual is thin, tidy and anything but exciting. After a quick once, over you feel confident that nothing was missed. Thankfully, someone obviously forgot to tell the engineering staff about the cheap price and it shows.

The case is a nicely textured plastic that gives a strong illusion of metal. There is a case open and a hold button on the body, with a DC input plug and the remote input. At 140g with the NiMH battery, the XG-3 has a light but well balanced feel. A single AA can take the place of the NiMH in a pinch without using a external case. Unfortunately, there is no carry strap but the body has a deeply grooved swirl on the sides for grip. When shown to a layman, their impressions are that it looks very high-tech and expensive, almost James Bond-ish. Score one more for the design team.

The remote is logically laid out with a nice system for smooth control. The seven buttons will suffice most operations with the "Shift" button being used for most of the configuration settings like bass boost, display, etc. The display backlight activates for 10 seconds upon depressing any button making an already uncrowded display even easier to see. The backlight is the standard blue-green indigo-glow. With a wealth of settings, thankfully, you can defeat the "Beep on Button" setting. There is also a clip on the back of the remote for true hidden body use. Tuck the player in your pocket or purse and away you go.

Sound quality with the stock set of head phones is tinny and lifeless. A standard mini-plug is on the remote so, feel free to plug in your favorite headset. A simple upgrade to a set of Koss HP6s made all the difference. Bass on the highest of the three setting can get muddy but at less than maximum volume is full and pleasing. Overall, I would judge the sound quality as Good but not Excellent. Maybe an even better set of phones might tip the scales further.

Overall, I think you'd be very hard pressed to justify the extra $70-$80 cost of the similar Sharp or Sony unit. I wouldn't be surprised to see this unit drop below the magic $100 mark on a super sale. While there is more style and maybe a few more features to be had, US MiniDisc lovers should stand up and cheer for the player that has all the right pieces to make MiniDisc the people's format. Now, if I could just get my wife to listen to me, instead of her new XG-3, I would cheer as well.