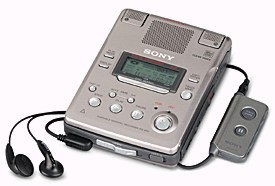 I have been using a Sony MZ-B50 for about one month and have the following observations:

The MZ-B50 is being described as the replacement/update for the MZ-B3, the rugged internal mic/speaker model used by many radio stations and others. Unfortunately, there are a number of puzzling aspects to the MZ-B50 that are very disappointing, not the least of which is cost versus features.

The MZ-B3, as I recall, had two hi-speed options (1.6x and 2.2x). The MZ-B50 has only one (1.6x). It's possible one reason Sony decided to do away with the second hi-speed play mode was their addition of what is called EASY SEARCH. This simply allows one to rapidly skip through audio in either direction. Each button press skips ahead (or back) one minute (up to a maximum of 20 button presses). It is, in effect, a faster version of rapid FF/RR (which you can still do on the MZ-B50 and other Sony MDs by pressing PAUSE and hitting FF). But -- why Sony did away with the double hi-speed options from the MZ-B3 I will never understand. And even when using EASY SEARCH, the machine still waits too darn long between the time you activate EASY SEARCH and the time the MZ-B50 returns to PLAY.

Which brings up another, and possibly more serious flaw. I have had two units so far. And on both of them, the MZ-B50 does not "engage" in FF or RR cue modes. Even pressing the REVIEW or CUE buttons lightly does not get the thing going -- and the average waiting time for these to kick in is 5 seconds with sometimes as much as 7-8 seconds required. This is really bad -- and it's something Sony should look at immediately. In fact, it's almost enough on its own to gravitate against a purchase of the MZ-B50. Surely, this is something that should have been detected in the quality control process.

Motor noise: the manual for the MZ-B50 states that motor noise will be picked up on the internal stereo mics. Although it describes mechanical noise as normal, it's my view that Sony could have done a much better job reducing mechanical noise in a machine costing upwards of $500. Like the MZ-R70's I have used, the MZ-B50 motor sounds like it's whirring away, working, working, working until it finally silences. This is not something that should be happening with a machine of this (hoped for) calibre.

Erase Mode Another quibble -- instead of enabling one to press ERASE twice to complete the erase process, the MZ-B50 makes you hit an indented ERASE button on the right side of the unit, then move your finger to the top to hit EDIT/ENTER. In my view, all MD recorders should have retained the control pattern seen on the old MZ-R3 which was a one button erase.

Two Play Modes On the MZ-B50 you get only repeat disc and repeat track. Sony has not enabled SHUFFLE mode on this machine. This is a shame...

Stereo/Mono Selector Thankfully, Sony placed an actual switch on the right side of the machine for choosing between modes. They also placed the HI/LO MIC SENS switch on the left side.

Volume Control Another poor design choice -- The small thumbwheel for VOLUME is on the right side of the machine, but is not naturally placed so as to be easily manipulated with the finger. A puzzle -- in one of the photos of the MZ-B50, the volume control is shown as being an UP/DOWN button control placed on the very front of the machine. On the actual final design, the HOLD button is in that location, with the volume control sent to the right side as the thumbwheel.

VOR A feature held over from the old TCM 5000 cassette portable. But on the MZ-B50 VOR operates very well, in my first trials. It is extremely sensitive and can be varied with the HI/LO MIC control.

Mic/Line Input Sony has put a small red sticker on the machine noting that the LINE IN jack doubles as optical.

Speaker It's OK, but I have to think that for $500, Sony could have used a higher quality speaker.

Builtin Microphone This is the one big selling point for the MZ-B50, aside from the internal speaker. This is a very sensitive recorder. I purchased it to relieve me of the need to carry a regular microphone and cables along to press conferences. Provided the subject isn't whispering, a MZ-B50 placed within 10 feet of the subject should produce air-worthy results. Remember, however, that when the motor decides it wants to make noise, this will be recorded on the MD.

Battery Uses only internal AA -- but you can of course use rechargeables. The MZ-R55 wall cube at 3volts seems to work fine with the MZ-B50 (polarity is the same). As for battery life -- I suppose it's another puzzle. Even with increased consumption with speaker and internal mics I would have thought that a figure higher than 6 hours for record would have been achievable.

Summary Something tells me the MZ-B3 will be a collector's item. I have used Sony products throughout my life (specifically worldband radios and tape machines) and have usually admired Sony's design efforts. However, I think compromises are being made in the MD arena. In my view, it is hard to compare the current MD portables with the MZ-1/2/3s of the 1990's. Most unfortunate in my experience with the MZ-B50 so far are the motor noise, and the slow engage of the AMS (FF/RR).

The features of the MZ-B50 (particularly the internal mics and speaker) just about make it worth my while. But I would strongly urge Sony to take a serious look at these design issues -- in fact, I think one -- the problem noted (admittedly on only two units) with FF/RR -- would be enough to justify Sony replacing units with this fault.

A few months ago, I posted my comments about the just released SONY MZ-B50 recorder, which was designed to replace the old MZ-B3. Unfortunately, design and performance problems with the MZ-B50 were immediately apparent. There was no variation with two units -- I purchased one, returned it, in the hope that these issues were limited to one unit, but the same problems were noticed on a second.

Earlier this year, I sent an inquiry to SONY and some weeks later received a reply from a SONY representative who promised to look into the problems and bring them to the attention of SONY designers in Japan. Here is a summary of information I have just received:

Sony says it is working on making access time faster, but the response refers not to normal FF/RR mode but to the new EASY SEARCH, which is a completely separate function with different buttons. I am unsure at this point if SONY realizes that there is a problem mainly with FF/RR in that the MZ-B50 takes an unreasonably long time to kick into FF/RR. Although occasionally, the machine will immediately go into FF or RR, most of the time the user needs to hold his/her finger on the AMS FF/RR button for as long as 6-8 seconds for this function to work. The response from SONY seems to indicate that they believe the EASY SEARCH mode should have quicker action. While one could hope for more rapid EASY SEARCH response, the main problem -- the one that is almost fatal from a professional standpoint -- is the FF/RR which makes using the MZ-B50 and searching for portions of recorded material like walking in molasses. The SONY response says: "Being a digital recording device recording on a disk, access time is controlled by the movement of the pick-up which unfortunately takes time." However, I have pointed out that previous MD recorders, such as my beloved MZ-R3, have extremely quick FF/RR action and TOC read times.

SONY also says it is "making efforts" to reduce excessive motor noise in the MZ-B50 (which from my experience was also noted in the MZ-R70). Although SONY clearly had to make some design compromises to fit a stereo mic and speaker into the MZ-B50, motor noise occasionally gets on to the disc at startup. While this may not be fatal for recording business discussions, it is a serious problem for professional radio/broadcast reporters seeking noise- free actuality.

The SONY representative noted my comment about the ERASE function being divided into two finger movements, requiring a button press on the side of the recorder and another confirming press on the EDIT button on the top of the machine. However, SONY says this was done to prevent accidental erasure. I would take issue with this, since on other models one only had to confirm ERASE by pressing twice on a single button -- far more convenient than having to move one's finger and/or hand across the body of the machine.

I remarked in my previous review about the sound of the speaker and suggested that SONY's technology/miniaturization experts could have come up with a better speaker. SONY responds by acknowledging my criticism, but noting that space limitations on the MZ-B50 limited speaker choices.

I also commented that it was a shame SONY decided to eliminate SHUFFLE mode in the MZ-B50. Although the machine is designed as a business recorder, it can obviously double as a nice play machine and would have cost nothing, I would think, for SONY to have retained this option. However, the SONY response is that the B50 was designed for business purposes and therefore there was thought to be "no apparent need for a shuffle mode."

On placement of the volume control on the right side of the B50 (a small thumbwheel, which is, in my view, too small to be easily manipulated) SONY confirms that the initial design concept was changed to allow the HOLD switch to be placed in an "easily located, visible and accessible position."

Finally, SONY says it will "strive to increase battery life in future designs." While the officially quoted 6 hour record time has, in my experience with the MZ-B50, seemed to be sufficient for most purposes, I believe SONY engineers should be able to come up with a solution that would extend it beyond 10 hours -- even given the additional power demands of the speaker and double mics.

Obviously, quite a few MZ-B50s have already been sold. I am not sure how SONY will deal with requests from users who have been dissatisfied with the performance of the first MZ-B50 design and its very obvious difficulties. My experience with SONY in worldband radios has been that it often takes a long, long time for simple fixes to be plugged into the production process. As SONY is concerned about its image with customers, particularly broadcast and other potential professional users of the MZ-B50, I would strongly recommend that a policy emerges which will allow for easy return of MZ-B50s plagued by the FF/RR difficulties, and either exchanges or refunds.

I would like to thank SONY representative Stephen Teplansky for staying on the case and taking my observations back to SONY in Japan. It is this kind of response to customer concerns that should be standard operating procedure.

Mr. Teplansky adds as a footnote that SONY will soon have the FS85B50 foot control available for sale which enables transcription using the MZ-B50.