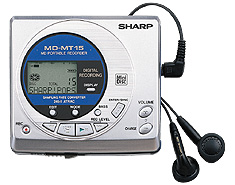 The Sharp MD-MT15H is a basic, entry level MiniDisc recorder. It uses Sharp ATRAC6.0 and is powered by a set of AA batteries or a NiMH AA pack. It has 10 seconds of memory and the usual connections. However, it does not come with a remote on its traditional headphones.

Every day, I check into minidisc.org to see the latest news on the Minidisc community. A few months ago, MDCP reported that MobShop was selling the Sharp MD-MT15H portable recorder for $139 with a $50 Internet rebate! Admittedly, I had never purchased anything online before, but an MT15 would ne a neat way to get my family into MD. For $90 USD, that would be a steal-the same recorder in Toronto is at minimum $279 Canadian. So credit card in hand, carefully watching the number of units sold one April evening in the lab, I put in my order and had it shipped to my friend in the States. Of course, later did I realize the possibilities of the name "MobShop" but...I'd given my credit card info already.

For a basic recorder, the MT15 came with a lot of accessories. The package includes an AC power supply, a 1/8th to RCA cable, a set of headphones with a rigid non folding band, and black felt bag. These are particularly appreciated: Though the unit doesn't come with batteries, the power supply is useful for extended recording at home, and the RCA cable lets a new MD user immediately make discs. The only missing element is a blank disc, but I suppose they have to leave something for the vendor to sell along with the MT15.

The MD on its way to Rhode Island, I decided to see what the MT15 looked like by visiting local Toronto stores. The MT15 is a chunky affair, about twice as thick as an Sony MZ-R55 or R90, and has a number of buttons arranged in a circular "crescent" layout. These include transport controls, volume up and down, and assorted menu/title/recording buttons. The MT15 is actually somewhat prettier than its older brother, the MT20 even if they are essentially the same unit with different accessories. However, my sister feels the fact that it is shiny tends to attract attention-without a remote, you have to hold it in your hand out of its bag.

One thing I noticed on almost all of the MT15's on display in stores was the battery door snapped or bent out of shape. The Sharp uses a pair of AA batteries but supports an encased NiMH pack sold separately. One can charge NiMH AA's in the MT15 if you depress a little switch at the bottom of the battery well.

We finally got to play with the MT15 when my friends in Rhode Island brought it up to Toronto. I turned it over to my sister to try, who is probably the kind of user Sharp targets for this model-new to MD, eager to dispose of income, Generation Y attention span and tastes. What we found was that a lot of "features" of the Sharp are more of preference than of actual design-They make sense to her but not to me, being a Sony R50/R55 user.

Recording with the MT15 turns out to be relatively easy. Pressing the RECORD button drops the machine into Record-Pause on a new track, which is a nice change from the automatic Record-Wherever-You-Are of the Sonys that have mangled many an important track. However, re-learning how to use the PAUSE button because of this feature took a little while. We ended up making several recordings from a Nightingale CMI SPDIF optical soundcard and it seemed to work very well.

Also not found in Sony recorders is live manual audio level adjust-you don't have to pause the recorder to adjust levels. I found this feature of the Sony MZ-R50 to be rather irritating when recording live choral music (variable sound levels) so this is welcome on the MT15.

Titling is accomplished by selecting from a scrolling set of characters on the right with the track forward and reverse buttons, pressing ENTER to put them in, and using the DISPLAY button to toggle between alpha and symbols etc. The layout of the buttons makes this relatively easy, perhaps easier than the MZ-R55 but not anywhere near as fast as the Sony MZ-R50.

Battery life for the MT15 varies. We ended up using 1400 MAh Maxell AA NiMH batteries, and we get about a weeks worth of general playback, about ten hours.

The included headphones are pretty airy. Originally, we took another pair of earbud headphones and plugged them in-though I ended up trying the included ones on the subway with my notebook PC for a while. I found it hard to discern outside noise from music. One good point about the MT15 stock headphones is that the cord only comes out on the left.

The 10 second shock memory is adequate, but my sister reports that walking with it in her purse will make the MD recorder skip. The recourse is to hold it in your hand.

The MT15 has little competition, at least in Toronto. Around the price range is the Sony MZ-R37 at $330 Canadian. Given the MT15's usual street price at $280 Canadian, it might be worth it for the remote and battery. However, the R37 is no better it terms of size or style. However, at $140 through Mobshop's deal, there simply isn't any comparison-generic rechargeable batteries are only $10.

About the only other option is to buy the Sony MDBundle6-an excellent deal at $200 USD at Sears and other vendors.

The Sharp MD-MT15H is a competent entry level recorder. Out of the box it is relatively complete, does its job well and doesn't cost very much at all. Those who wish for more features, a smaller size or more stylish design might be better off with a more expensive model, but the MT15 is an excellent choice for general public, non-early adopter, consumers.