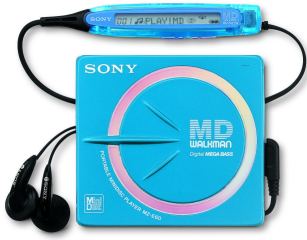 09/14/2000 - I decided to submit a review of the Sony MZ-E60 MiniDisc player walkman, after looking on the web and not finding any detailed user reviews. There are a few short comments at t-station:

There are (currently) no reviews at epinions.com, and very little information at deja.com:

I originally learned of the MZ-E60 at the "source" - the minidisc community web page:

Since I don't have access to high quality imaging equipment, I'll point you to this site which has excellent multiple angle views of the MZ-E60:

I purchased my MZ-E60 last week from Electronics Emall, a Yahoo store, for $129 USD plus $10.95 shipping. The following link shows all prices for the MZ-E60 at the various Yahoo stores, and you can sort the list by price. When I placed my order, there was one store selling the unit cheaper ($128), however the shipping charge was nearly $15 -- making the Electronics Emall a better buy. Therefore, be sure to shop around carefully to get the best deal:

Why did I choose the MZ-E60 over the other portable players out there? I wanted to replace my aging MZ-E3 minidisc player, and was looking for an inexpensive, battery efficient portable player. I loved the MZ-E3, but its 6-hour battery life (on 2-AA's) wasn't cutting it for my car & gym listening needs, and I found the brief skip-protection (no more than 10 seconds, from my experience) to be inadequate for my daily abuse :)

I prefer using common AA batteries to the proprietary ("gum" type) kind, so an AA drycell based player such as the MZ-E60 is ideal for me. I had previously purchased a Sony MZ-E44 player, but determined that it didn't meet my needs; more on that later.

I have mixed feelings about the MZ-E60's appearance. I purchased the light teal/blue version (which seems to be the only color choice available in the USA). I like the color-changing, dark blue shade of the MZ-E44 much better, but function won over form in my decision. As for the external design, I'm not particularly fond of the MZ-E60's looks, preferring the rugged appearance of the MZ-E44 instead. However, this is a subjective matter, and you can view the pictures and judge for yourself.

I'd like to point out a couple of things about the player: it has an all plastic casing except for the metallic lid, and the translucent ring on the lid is not see-through as one might presume. That said, I do like the compactness of the unit. The top surface is almost exactly the size of an MD case, and the height is approximately two MD cases stacked together (except for the bulge where the battery compartment sticks out). Most other MD players require an unattractive, clip-on battery case in order to accommodate an AA battery. This is the primary reason I prefer the MZ-E60. While there are players with longer battery life, they feel bulky with the external AA battery case attached, and the connection seems delicate (as with the MZ-E44) -- definitely not something you would rumble and tumble with. The MZ-E60 feels quite solid and durable with its one-piece constrution, despite the plastic outerbody.

The main body controls (vol down & up, stop, rew, play/fwd) are on the underside of the MZ-E60, and they are all the same shape. I cannot say I am thrilled about this arrangement, especially compared to the MZ-E44 where the buttons are placed on the front of the unit for easy access. Consequently, I use the controls on the remote almost exclusively (there are hold buttons on both the player and the remote). The "AVLS" and "Digital Megabass" switches are placed on the front of the player, even though I rarely change these settings. The "Open" button is located on the left side of the unit, and it only requires a single press to firmly pop open the lid and eject the disc.

The "stick" remote has all the primary controls plus "pause", "display" and "play mode" buttons. You push the top of the remote (rather than twist, as on older stick remotes) to skip & scan tracks, making for easy one-handed operation. The LCD panel on the remote control is not backlit, unfortunately. The headphone input jack on the remote is a standard stereo mini-plug, instead of the proprietary micro-plug featured in some earlier Sony remotes -- a much improved design.

The included headphones are not the earbud type, but over-the-head variety. My primary complaint is that the cord is too short, as typical of MD headphones provided by Sony. I put it back in the box and broke out my favorite pair of Sony earbuds instead.

I have to mention that the MZ-E60 does not have a DC input jack. Therefore, if you are planning to use an AC adapter to power your MD player, forget it with this model.

I don't claim to have golden "audiophile" ears, so I won't provide an in-depth analysis of the sound quality of this player. Suffice it to say, it sounds as good as any other MiniDisc player I have ever heard (which is much better than analog tape, and comparable to CD, IMO).

I was really excited about the MZ-E60's proclaimed battery life: 12 hours on a single AA (four times better than my MZ-E3!). However, while the battery life is definitely longer than my MZ-E3, I cannot validate Sony's claim. The player's battery meter acted up from the start. It would fluctuate wildly during normal operation. For example, I inserted a fresh AA battery when first using the player, and tried all the functions -- skipping tracks, pausing playback, stopping and restarting a minidisc, and changing discs. During this time (and not even an hour of playing time had elapsed), the battery meter would go from full to half, to completely empty then back again. I never experienced any problem or disruption during playback, so I must attribute this strange behavior to Sony's power management system.

Overall, I am very pleased with the MZ-E60. It suits my needs, is reasonably affordable, and IMO a pleasure to listen to. If Sony had included a battery meter on the player, more ergonomic controls on the body, and offered more mainstream color choices, the MZ-E60 would be just about perfect.